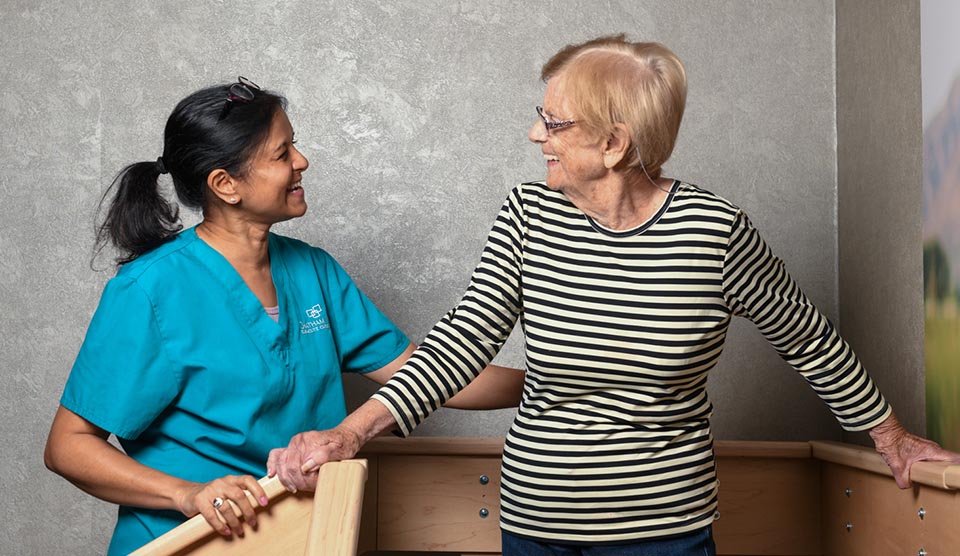 Anita was admitted to Overlook Medical Center on September 18th, 2018, with an initial diagnosis of septicemia. She had a pacemaker since March 7th, 2018, but the outcome was not what she thought it would be. She contracted a terrible infection from the pacemaker and had to be placed on IV antibiotics. She was informed that she would need extensive rehabilitation to return to her prior level of function.
Upon admission to Chatham Hills, Anita stated that she was “very impressed with how well people are at explaining things.” She was evaluated by our incredible therapy team to determine how much therapy she was going to need. During her evaluation, she demonstrated excellent rehabilitation potential as evidenced by her positivity and willingness to participate fully in therapy.

When Anita arrived to Chatham Hills, she had a goal to walk without experiencing lower back pain from a previous surgery. Anita was greeted by our highly trained-therapists, Sue, Leslie, Sara and Steve. During her initial assessment, she was able to ambulate only 150 feet with stand-by assistance, was not able to ascend/descend stairs and needed contact guard assistance with all activities of daily living (ADL’s) due to poor balance.

Because of the deep-seated infection, Anita made her physicians remove the pacemaker. She was discharged to the hospital from Chatham Hills for a planned surgery. She returned after eight days feeling weaker than before. Her new goal upon readmission was to walk better and further without any assistance and without any pain in her lower back and hips. Our wonderfully skilled therapy team knew that she would get to that point with her dedication.

Nearing her discharge date of October 19, 2018, Anita reached maximum potential with skilled services! She was able to ambulate unlimited distances with a rollator, able to perform self-care tasks and able to perform her activities of daily living on her own.

Our Director of Concierge Services visited Anita to see how her stay was going. She was very satisfied with how she was improving. As Anita states, “the therapy department is really remarkable. They got me moving which I wasn’t doing when I came in. They listened to what I told them, were incredibly kind, and always made sure we were properly situated. They made a big difference while I was there.”
Team Chatham Hills was thrilled to congratulate Anita on her progress while she was here and wish her continued success back at home!